Developers sold 136 EC units in October. The number of unsold EC units is running very low. Based on Oct’s numbers, only 221 EC units remained unsold. Based on 2021’s monthly sales rate (excluding months where there are EC launches) of 108 units for EC, there could be no available EC units in the market by the time North Gaia along Yishun Close is launched for sale in 1Q 2022.

Buying momentum in October was boosted by the near sell-out of Jervois Mansion on the first weekend of sales. Jervois Mansion sold 99% or 104 out of 105 available units at a median price of $2,553 psf. This is possibly the best first weekend sale for a project in 2021. Buyers are drawn to Jervois Mansion’s expansive land, which is a rarity in the Chatsworth-Bishopsgate vicinity. The healthy and sustainable living concept also resonates with buyers.
Sales in the CCR made up 30.9% of total sales in October 2021. Another significant deal in the CCR include a penthouse at Les Maisons Nassim for $75 million or $6,210 psf. This is possibly the priciest penthouse by quantum and psf in recent years.
As a result, the proportion of purchases priced at $2 million and above rose to a high of 39% in Oct on the back of more transactions in the CCR. The average price paid for a unit in October was $2.25 million.
Figure 1: Transactions $2 million and above in 2021 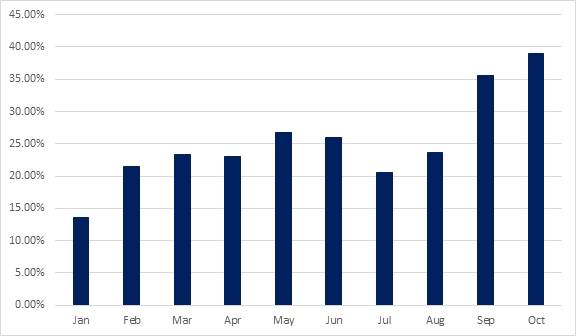 Five of the top 10 best-selling projects in October are in the Outside Central Region (OCR). The OCR accounted for 38.2% of the total sales in September. The RCR accounted for 30.9%.
The top ten private residential projects for October 2021 are: 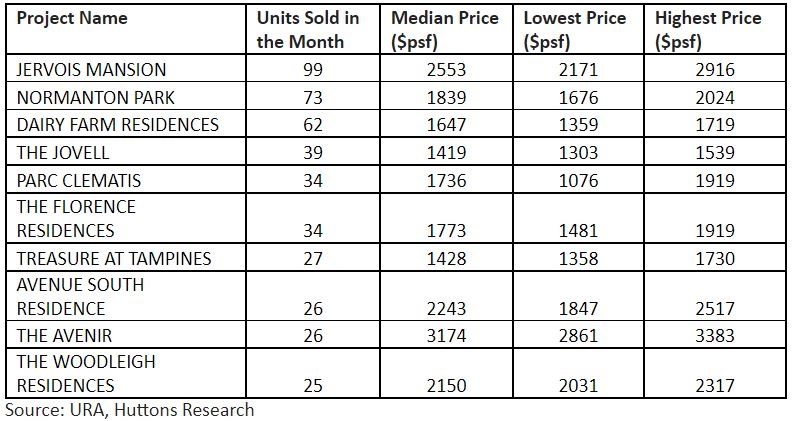 There will be three launches in Nov, starting with CanningHill Piers, The Commodore and Cairnhill 16. CanningHill Piers gives buyers probably once in a lifetime opportunity to own an integrated development by the Singapore River and Fort Canning Hill. It is the tallest development by the Singapore River and offers magnificent views of the city and Fort Canning. The Commodore will be the second launch in Sembawang after The Watergardens at Canberra. The palatable quantum for Cairnhill 16 makes entry into the luxury market more accessible and will appeal to singles and small families. Furthermore all units come with private lift access.
Perfect Ten, Mori and Zyanya will be launch for sale in Dec. In total, there will be an estimated 24 launches in 2021, almost half the number of launches in 2019.
Developers are estimated to have sold 10,918 units in the first ten months of 2021. This is 9.4% higher than 9,982 units sold in the whole of 2020. The market should end the year on a high of around 13,000 new sales.
The biggest groups of foreign buyers are unchanged since 2019 – China, Malaysia, India, Indonesia and USA. Out of the top five, only USA and Malaysia have a VTL with Singapore. If there should be VTLs set up for more ASEAN countries, this will further boost transactions in the property market in 2022.
Top