This is the third highest monthly developer sales volume in 2021 and the highest November sales in 10 years. The sharp spike in sales was due to the successful launch of CanningHill Piers and The Commodore. The two project launches accounted for 47.8% of total sales in November. CanningHill Piers moved 576 units including the $48 million super penthouse while The Commodore sold almost 75% of its total units.
CanningHill Piers is the best-selling project in the Central Area in 2021. Buyers were eager to grab a unit in the tallest development by the Singapore River. Furthermore, it is a rare integrated development by the Singapore River and Fort Canning Hill. The Commodore is the second launch in the Sembawang-Canberra area in a short span of three months. The transformative plans for the area and the quality finishes provided attracted buyers to the development.
In Nov, the proportion of purchases priced at $2 million and above stands at 39%, unchanged from Oct. The average price paid for a unit in October was $2.12 million. 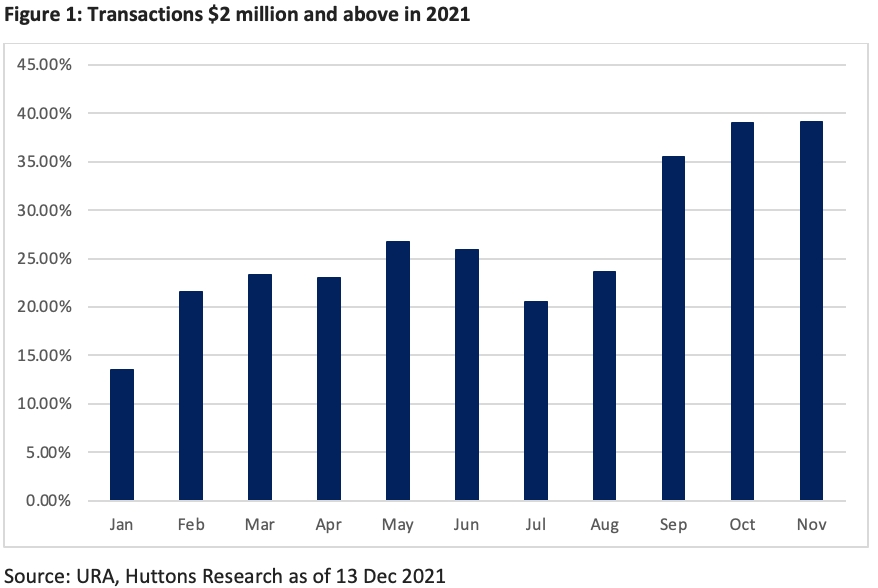 Four of the top 10 best-selling projects in November are in the Outside Central Region (OCR). CanningHill Piers drove sales in the RCR to a high of 58.8%. 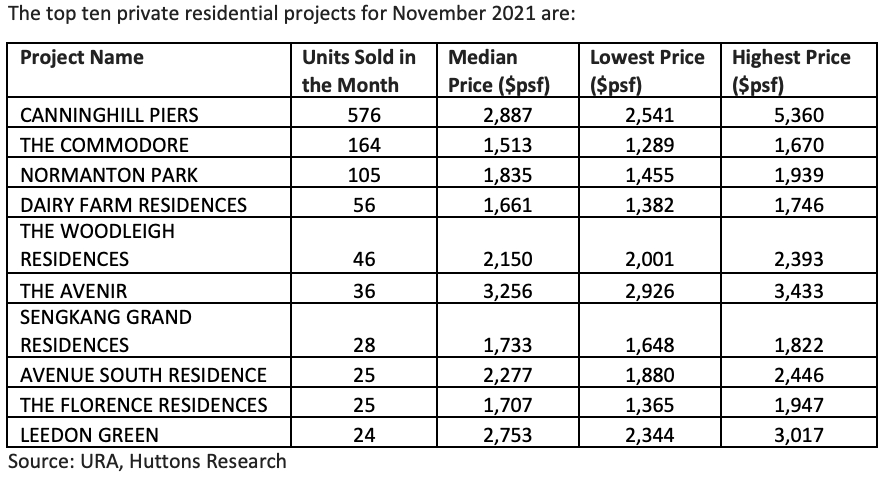 Developers sold 63 EC units in November. The number of unsold EC units in the market is 178. The available choices for buyers are running low before the next EC launch, North Gaia likely in March 2022.
There are an estimated 24 launches in 2021, similar to 2020. However, developers are estimated to have sold 30% more in 2021 compared to 2020. The market will cap off an excellent year with three more launches in Dec – Mori, Perfect Ten and Zyanya. Mori has already sold 45% of its units on launch day. Perfect Ten and Zyanya will book sales this weekend.
In 2022, there may be up to 41 launches (excl EC) but the available units are much lesser at 5,390. Projects that may come onstream in 1Q 2022 include Belgravia Ace, Kovan Jewel, Royal Hallmark and The Arden. Two EC projects may be launch in 2022 – North Gaia in Yishun in 1Q 2022 and another along Tengah Garden Walk. Some projects to look out for in 2022 include Jalan Anak Bukit, Lentor Central, Northumberland Road, Ang Mo Kio Ave 1, Liv@MB, Tanah Merah Kechil, redevelopment of Fuji Xerox Towers, AXA Tower and Flynn Park.
The new home market may witness sales between 10,000 and 11,000 units in 2022. Robust economic growth, low unemployment rate, higher vaccination rate and a stable political environment will support sales. The luxury market may get a boost when more Vaccinated Travel Lanes are set-up and foreigners are able to travel to Singapore.
Top